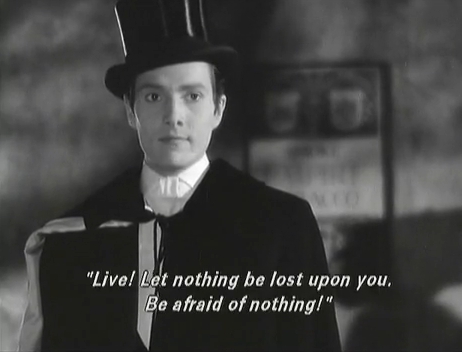 Watched the 1945 The Picture of Dorian Gray (dir. Albert Lewin) last night and experienced a kind of aesthetic angst when Dorian (Hurd Hatfield) first came on screen. I wanted him to take my breath away. ‘I have the simplest tastes. I am always satisfied with the best,’ said Oscar Wilde. Well, I had simply imagined Dorian as being more striking. ‘Handsomeness’ is terribly subjective, but this is not the only place where a film version of DG falls down (for me). There is the portrait itself. Gruesomeness is also subjective.

Finally, those Wildean witticisms, so pleasurable to read, made for a very over-the-top screenplay. It also meant that Lord Henry Wotton (George Sanders) spoke so quickly I could barely hear what he was saying.

But the film is still enjoyable. The sets, in particular, are dramatic and engaging. And Angela Lansbury continues to delight me as a young actress (growing up, I always knew her as the perfect older one).

I read Oscar Wilde’s The Picture of Dorian Gray as part of my ongoing 20 classics project. You can find that post here.