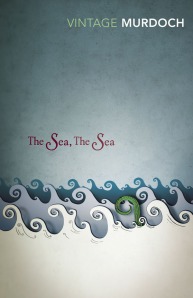 Why did I want to read it?

Years ago I saw the moving film Iris with Kate Winslet as Iris Murdoch. The film was an education, and I’ve been meaning to read one of her novels (and there are many) ever since. The Sea, The Sea won the Booker, and was the one some of you pointed me towards (on Twitter).

When was it published?

In 1978. Mine is the Vintage Classics edition, with an introduction by John Burnside.

Charles Arrowby, a retired theatre director and personality, moves to an isolated, damp house on the rocks by the sea. He is alone for some time, swimming and cooking, then is visited by various visions and old lovers and friends. He soon realises his first love, the one he never got over, is living in the village nearby and he begins to think about ways he can ‘rescue’ her from her supposedly torturous marriage.

Tell us more about the author.

The first thing I’ll say is that Iris Murdoch was prolific. Between 1954 and 1997 she published 26 novels and five books of/on philosophy. She also wrote six plays and published poetry. She was born in Dublin in 1919. She studied at Oxford (which I’m visiting in a few days) and Cambridge and worked during the war was an Assistant Principal at the Treasury, then worked with UNRRA.

In 1956, at Oxford, she met and married English professor and novelist John Bayley. They were together until her death in 1999, and he wrote three books about her. She suffered from Alzheimer’s Disease from 1995. They had no children.

Murdoch received countless awards in her lifetime including the Man Booker Prize for The Sea, The Sea, the CBE in 1976, the Gold Pen for Distinguished Services to Literature at the 1997 PEN Awards, and in 1987 she was made a DBE in the New Year’s Honours Lists.

The themes of her novels ranged but from what I’ve read her love of Shakespeare is evident in many of them, as is space for the inner lives of the characters, shaped by her philosophical study and writings.

I found an exquisite article, a personal story about Iris: ‘Watching Star Trek with Iris Murdoch’ by Wendy Lesser. Check it out here.

So, what did I think? Does it deserve to be a classic?

I admired this book. What intelligence and patience Murdoch must have had, to write something so meditative, so contemplative and even repetitive (the way our thoughts circle, recur, reconsider, reverse, recover). Charles Arrowby, at the beginning, is famous and alone with the rocks, the sea, the house and the tower. The sea is his companion, sometimes inviting, sometimes menacing. Throughout the book there are so many descriptions of it, and the weather, too:

‘The sea was in a restless, fussy mood, dark blue in colour, that grim cold northern blue which even in summertime can convey a wintry menace.’

‘I went out to see what the horrible sea was up to. It was calm and slippery, sliding in among the rocks like oil.’

Charles is also a proud cook and takes pleasure in eating. He records many meals in his memoir/diary/philosophical journal which he later calls a novelised diary. These passages are delightful, and all these small details give the novel such texture, and round out the character of Charles.

The first thing that really ‘happens’ in the novel, is that Charles is visited by a vision, an immense black creature rising from the sea. He is terrified by it, and later puts it down to a possible recurrence of a bad acid trip. Among the descriptions and the visions, Charles begins slowly to recount aspects of his past for us, about his career in the theatre, but mainly about his love affairs, his friends and his family, particularly his cousin James.

James is one of two characters who threads the past to the present, who provides an ever-present agitation for Charles. The other is Hartley, his first love. When he finds out that Hartley is living in the village he again experiences the ‘fierce indubitable magnetism of love’. Hartley becomes a kind of inscrutable character, a challenge for both Charles and the reader. He maintains that though she is old and plain and wretched, he loves her (maybe even more because of it). He fantasises about ‘rescuing’ her, and commendably Murdoch makes the situation, and the traps, ties and binds, multi-layered. Nothing is black and white, and as it’s in first person, of course we also try and pull apart Charles’ reportage. Just as anyone probably is in their diaries, he is at times creating the truth as he wants to see it. At other times he pulls back the facade by simply acknowledging its existence, or by asking questions of his earlier self.

‘Of course this chattering diary is a facade, the literary equivalent of the everyday smiling face which hides the inward ravages of jealousy, remorse, fear and the consciousness of irretrievable moral failure.’

By asking questions of his earlier self, around memory, around incidents, those memories and incidents are in fact rewritten. This kind of instability of truth, of memory and of feeling – due to pain, passion, regret, guilt, the ego and otherwise – seems to be one of the main points of the novel. This is enhanced by the visions Charles sees – both frightening, and later on, redeeming. There is another point to this, Burnside points out in his wonderful introduction, tied-up with some overriding themes of a spiritual quest (his cousin James, too, is a spiritual force throughout, being a Tibetan Buddhist). There are several references in the book to Milapera, the Tibetan poet-mystic, and Burnside relates a story of Milapera going into his cave and being confronted by demons. After trying to get rid of them with all sorts of tactics, ‘they would not leave until he ceased regarding them as “bad” and opened to them, saw them as they were… By being willing to accept the demons and gods and goddesses as they are, Milapera transmuted them. They became dakinis, or the energies of life’ (citing Chogyam Trumpa’s Cutting Through Spiritual Materialism). So the literal and metaphorical demons (the theatre folk he’d taken himself away from) at first, for Charles, are negative presences, and through jealousy and other reasons he cannot accept them. For example, he cannot accept that his ex-lover Lizzie and their queer friend Gilbert have shacked-up together because of a kind of ‘soul love’. Towards the end (without giving specifics away), some of those demons and goddesses have been accepted, including his life-rival, his cousin James, who manifests in a new and remarkable way to him. But the ending is deliberately not neat or tied-up (and some demons persist), as Charles says: ‘Human arrangements are nothing but loose ends and hazy reckoning, whatever art may otherwise pretend in order to console us.’

As Burnside mentions, the novel also has ties to The Tempest and Charles also ‘rather theatrically adopts the pose of the Romantic loner, confronting the wild forces of the natural world, in his pools, his land, his sea.’

It’s a long time to spend in the voice of one character, 538 pages, but it never feels padded-out, there is no superfluity. He eats, he remembers, he drinks, he plots, he shares, he swims, and people die. They die and they go away. There is grief. There is grief and doubt. There is hope – nature, goddesses, no ending…

I’m halfway through my overseas trip and I’ve read several classics. I’m not sure which I’ll write about next, but perhaps a ‘lost’ classic I discovered in Edinburgh. I’m also finishing Richard Yates’ Cold Spring Harbor and Philip K Dick’s Do Androids Dream of Electric Sheep? And I’m keen to start on Muril Spark’s Memento Mori and Vladimir Nabokov’s Bend Sinister. Internet time has been limited on this trip, but I’ll have plenty of drafts ready to throw up on the blog when I get back.

Have you read Iris Murdoch? Is this your favourite? I’m keen on the idea of The Unicorn and The Black Prince also.