On the weekend I was up in sunny Brisbane for the Australian Booksellers Association 2010 conference. It’s a conference for members and friends of the ABA – so, booksellers, publishers, and some librarians and media. I was officially there as a ‘blogger’ – on a panel called ‘Customers, Connections and Communities’, with Andrew McDonald from Readings, Jon Page of Pages & PagesBookstore and Kate Eltham from the QLD Writers Centre and if:book Australia. It was run by Elliott Bledsoe, a super-intelligent (and super-fun) copyright lawyer who gets to talk to people in all different industries about the way culture is shifting. Elliott also had an awesome Bowie shirt on later in the evening (obviously worth mentioning). 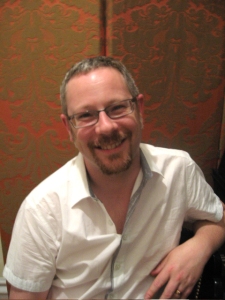 It was a fantastic experience. The audience were engaged and curious – many said they’d been wanting to use social media but just hadn’t really known how to go about it yet. What tools were out there, which tools would you use and why, what does it do for the business, exactly? I think our presence kind of revealed, too, the role blogs, Facebook, Twitter etc. were already playing in connecting books to readers. In creating community. Why shouldn’t bookstores be in on that? A lot was covered – who in the store might do it (or even a customer); why shouldn’t people use these tools and what shouldn’t you do if you do use them; how you can use existing channels; how these connections and conversations can create loyal customers, word of mouth, etc.; how having ‘personality’ online doesn’t necessarily mean you have to be ‘confessional’; and more.

John McIntyre, from the Children’s Bookshop, in Wellington, NZ, said it was the most informative panel he’d seen in 20 years of conferences! Afterwards, all of us were verbally tackled by different people with different ideas and follow-up questions. The booksellers were enthused.

There had been three prior speakers on the day – all vaguely around the theme of connecting with and engaging customers. I’ll talk about Richard Nash last, because one should leave the best for last (BTW, here’s an interview I did with him in B+P). Just briefly, Gary Bertwistle was what I see as a more traditional kind of marketing guru – he was all about ‘branding’ the perception of your business into the minds of customers. At one stage there was a slide of a baby with tattooed logos all over it. *cringe*

Bertwistle had some good points about perception, but I disagreed with his general message. I think people are clever and skeptical, and will often buy products on recommendations from friends or trusted ‘authorities’ as opposed to going: ‘Woolworths says everywhere that they’re fresh, so that’s where I’ll shop for fresh food.’ He also said he looked at all the booksellers’ websites and that they had nothing to differentiate themselves from each other. I don’t think he looked very hard. A bookstore can’t be a cold, hard brand – bookstores remain in people’s minds because of the kind of culture, community and vibe they establish. I shop at Readings, for example, because the staff, and the reviews on the website, and the events, and their foundation, all show that this is a store for and run by people really interested in books. Same with Reader’s Feast. I chose my hairdresser because they were the cheapest on Acland Street but I keep going back because my hairdresser is lovely. And I’ve recommended her. I would have no idea what their ‘slogan’ is. Anyway, he mainly grated with me when he called authenticity a ‘global trend’.

I don’t think authenticity is a ‘trend’. How canyou connect, if everything is constructed, is surface, with a purely economic imperative behind it? And Richard Nash confirmed everything I thought about this. I’m actually writing up an article on his talk, which I’ll share here down the track, but very briefly, he talked about the problem with supply – that the process is stuck with a focus on ‘giving you something to put on your [bookstore] shelves’, where it should be ‘connecting writers and readers’. What’s the solution? Well, ‘algorithms don’t help with idiosyncratic, character-driven cultural artefacts’, Nash says. The data just doesn’t work – ‘you need humans’, like Oprah – a reader and a ‘human intermediary’. Reading is an ‘act of tremendous intimacy and commitment’ so for two people to share what they have read – this is a ‘tremendous commonality’ and thus, books can be ‘social glue’. He encouraged bookstores to dare to try, try and fail then fail better. And gave examples of booksellers finding ways to connect, ie. Northshire Bookstore (who have installed an espresso book machine), Boulder Bookstore (who not only do print-on-demand but have print and promotion deals also), Word Bookstore (who function partly as a bookish dating service through a bulletin board and singles evenings), and Changing Hands Bookstore (who have an in-store creative writing program).

Much later in the night, a few of us ‘connected’ over some wines. It was wonderful to see many familiar faces – my old bosses from Dymocks Coffs Harbour, Pam and Jon, (who now run the Brisbane store); the crew from Bookseller+Publisher; publishers; publicity folk; passionate booksellers. I particularly enjoyed meeting a few people whose online activities I’ve been following with interest, including Jon Page and Richard Nash – both intelligent, kind and passionate dudes. Nash did admit to me that he’s a ‘big softie’ and wears his heart on his sleeve. I’m so glad there’s at least one consultant/speaker out there who does that. Nash is traveling around a bit while he’s here in Aus, too, so do go and see him if you can. 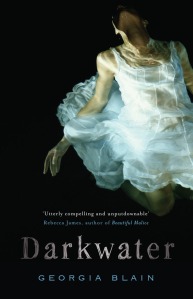 Also, what have I been reading? Feel free to share your thoughts on these, too!

The Easter Parade – Richard Yates
Yates devastated me (again) in this tale of a woman’s life, specifically as tied to her sister. I felt sick and sad at the end – how a whole, sad, life can be contained, compressed into those pages. So many heartbreaking moments that have stayed with me. The characters never really stretch themselves for love, for people, or even for themselves. I loved it. Just as I loved the Collected Stories and Revolutionary Road.

Bereft– Chris Womersley (not out until September)
Absolutely wonderful. The best Australian book I’ve read for ages. I reviewed it for Bookseller+Publisher and I’ll share that review closer to the book’s release. HIGHLY recommended. I wanted to re-read it straight away, which is very rare for me. I remember it more like a film, than a novel, particularly the ending. So vivid. When I finished it, I just said. ‘Oh, cool…’

Darkwater– Georgia Blain
Blain is on two of my Byron Bay Writers Festival panels, next month. This is her YA mystery novel – set in ’70s Australia. A schoolgirl has been found dead and 15-year-old Winter wants to know what happened. I don’t read much YA but found this quite compelling. Easy to read, and a nice, consistent tone.

The Mary Smokes Boys – Patrick Holland
Holland is also on one of my panels. I reviewed this rich, literary character/s study for the Byron Bay Echo magazine, and I’ll post that here soon too. Here’s an extract: ‘I think about a book like Philipp Meyer’s American Rust, in terms of some of the setting and themes – friendship, violence, isolation and most definitely changes over time, and transience; combined with the insular, things-only-getting-worse, narrative of something like the Coen Brothers’ film A Serious Man; but with selective and beautifully rendered features of Australianness, like in Matthew Condon’s The Trout Opera – features which are contemporary, but… the novel as a whole feels old-fashioned.’

Bleed For Me –Michael Robotham
I don’t read a lot of crime fiction either, but this is one of the great things about chairing festival panels – you get introduced to new genres and authors. I’ve enjoyed Garry Disher (another Aussie crime writer) before and Robothom sure knows how to spin a yarn. Fantastic characters. I’m looking forward to asking him about his research, and about weaving a complex plot.

The Legacy– Kirsten Tranter
The book has a great, indulgent feel to it. Gorgeous details of rooms, houses, Sydney, New York. Overall I did feel a little detached from the characters, even the narrator and protagonist Julia. But there was plenty to enjoy. I know people adore this book – including quite a few of my Twitter followers. The novel is about three people who became close and then drifted apart, a triangle of unrequited love, and unanswered questions. Then something happens to the beautiful, enigmatic Ingrid. I was compelled to read on, and enjoy the scenery. Tranter is also on one of my Byron Bay panels.

One thought on “Last weekend’s literary connectivity, and what I’ve been reading lately”