Emerging from their teens, Patti Smith and Robert Mapplethorpe first encounter each other in 1960s New York, a recognition as much as a meeting. Smith has fled the aftermath of an unplanned pregnancy and adoption, and the factory future that faces her in New Jersey. Mapplethorpe has broken from a Catholic upbringing – the restraints of it, and of his family, never quite loosed.

In the New York of 1967 they fall together easily, inhabiting a love and friendship that recognises and provokes the creative expression of each (Mapplethorpe wants her to sing, Smith urges him to take his own photographs; ‘one cannot imagine the mutual happiness we felt when we sat and drew together’). A banister up a staircase, a rope through dark water, a guiding blue star: their friendship sees them through odd jobs, early sketches, illness, hunger, fame, and the sad fates that wait for many around them.

Though this is a memoir that takes us through the iconic days of the late sixties and the corridors of the Chelsea Hotel – telling of encounters with Janis Joplin, Jim Morrison and Jimi Hendrix , the Andy Warhol set, William Burroughs and Bob Dylan, among others – it is alive in ways that belie the cliché of that setting. Smith’s magic is to perform a kind of time travel for us, scraping away any nostalgic varnish. Hendrix stops to talk in a stairwell and becomes just a shy musician, Joplin is passed over for ‘one of the prettier hangers-on’ and we are heartbroken with her. We are grateful for the immediacy of these encounters, but even more for how close they come to being incidental – instead of starring, these other famous figures shift and fit around the true story (so that, watching Jim Morrison, we stay with Patti as she guiltily thinks ‘I could do that’).

A poet and musician, Smith knows something about telling moments and well-wrought phrases. Thinking of this book a few weeks after finishing it, I picture some thing of pure clarity – the element left when impurities have been burned away, or the lucid thankfulness that comes after a fever has passed. Smith selects her remembered moments carefully, trusting that we will trace the patterns.

This memoir will send you to your record collection, to the bookstore, to the cinema, the gallery, the internet: Rimbaud, Blake and Joan of Arc are early heroes, Picasso transformative; Smith goes to see the Velvet Underground and we want to hear Lou Reed, she writes a Rolling Stone piece about Lotte Lenya and you want to find out more and listen to Dylan’s ‘Bringing it All Back Home’ again; who is this Vali Myers? I must watch Midnight Cowboy… the notes pile up, the dog-eared pages outnumber the unblemished.

If the vitality of the book stems from Smith’s faithfulness to the central relationship with Mapplethorpe – a story arc for the meetings and memories – it also flows from the central assumption, so breathtakingly, beautifully pervasive, that life is lived for artistic expression.

‘Did art get us?’ wonders Mapplethorpe, as he nears death. ‘Perhaps it did, but no one could regret that,’ writes Smith.

At sixty-three, she is still producing music and words. The creative impulse that urged her and Mapplethorpe to forgo meals to buy art supplies is the live wire running through their story. It threads through incidents both beautiful and ugly, like the strings the pair would decorate with beads and broken fishing lures to wear and sell. It is the simple heart of their sometimes complicated relationship and it runs through Smith’s life still.

As a result, her stories have not tipped from the real to the rehashed, made empty with wearied retelling. We are there with these kids as they take photos, draw pictures, write poems. This is a portrait of youth and somehow of the way creation can keep us young – playful and awed. Writes Mapplethorpe: ‘I stand naked when I draw. God holds my hand and we sing together.’

Just Kids is a beautiful song in the pages of a beautiful book, a tale pared back to the thread that ties two souls together and a talisman for anyone drawn to create, or drawn to those who are. 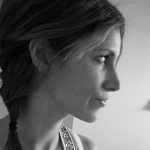 Matthia Dempsey is a writer, reviewer and editor of Bookseller+Publisher Online and the book blog Fancy Goods.

My Tweets
One thing that’s cool is that, despite having left @echo_publishing, books I acquired will continue coming out this year (and even next)! Just received @alisonwritesthings’ Euphoria Kids in the mail (out Feb) and it feels wonderful to hold this book, one that pushes boundaries in a deliberately joyful way. EK is peaceful and comforting and a celebration of gender diversity. I will always be proud of being Alison’s publisher, and grateful for what I have been able to share and learn in the process of working on three very different books: Ida, Highway Bodies and Euphoria Kids. ❤️❤️❤️ #AlisonEvans #gendereuphoria #euphoriakids #highwaybodies #ida #ya #youngadult #books #fantasy #speculativefiction #queerlit #transliterature #nonbinary #enby
Glorious sight yesterday heading back up to Mum and Dad’s – not smoke this time, but mist. We drove up through the clouds. It rained on an off all night. 💓 #nofilter