Josephine Emery’s The Real Possibility of Joy: A Personal Journey from Man to Woman is released in September from Pier 9. It’s a compelling, poignant, fascinating, honest memoir. And as a writer, screenwriter and former director of the literature board at the Australia Council for the Arts, Josephine Emery really knows how to write. I reviewed the book in the September issue of Bookseller+Publisher magazine, but I was keen to ask Josephine a few questions about the book, her journey and herself.

In your travels, you have come across cultures that are more accepting of gender flexibility, or change, such as in Tahiti. Can you tell us a little bit about this?

All across the Pacific and Indian Oceans – from the Pacific coast of the Americas through Hawaii, Polynesia, Oceania, Asia and India there are well-determined cultural roles for those of us caught within the trap of gender. Some of those roles are very restrictive: they are cultural traps in themselves. But they do demonstrate a worldwide historical and cultural continuity of having to deal with people born with this difference between perceived self and ‘true self’. Many of those living in such roles were systematically eliminated by invaders. Christianity and Islam never took comfortably to the idea of gender variance! Before I came across these stories I was fascinated by Tiresias in the Greek plays: who went from male to female and back again. That’s gender fluidity for you! And that’s another example of the embedded historical evidence for the awareness of gender variance.

Has writing your memoir – your journey, your struggles – been a cathartic experience? Or another step on the journey of understanding and acceptance of the true self?

The writing was more confrontational than cathartic. It forced me to access memories I had buried and interrogate my own behaviour from the viewpoint of others. By the end of the writing I had stopped judging those who had been caught in the gender trap with me and who had lashed out as they fought to keep themselves clear of what was consuming me. I could see a much bigger picture of what we had all been through and how they had suffered as much as me. So, it did enrich my self-understanding/acceptance. As to the ‘true’ self, every day has been a revelation of some deeper, richer facet of what lies within me. I think that the ‘true self’ is more a process of becoming than the end result of such a process.

There are references to mythology, nature, religion, psychology, literature and much more woven through your personal narrative, making it rich and layered (as a person is). How much has a background writing fiction and film come to assist this expression?

My ambition was to write a book that would make accessible all that it takes to be human. (Hmmmm…nothing like having BIG ideas!) I spent most of my life trying to explain my difference to myself: trying to create a life-narrative role for me. So, I read and thought to great depth in all those fields, looking for answers. Never found ’em. Or the ones I did find were partial at best. It meant I had an enormous mental file of knowledge to draw on for the book. The skills I learnt as a narrative writer then came into play in enabling me to meld all that stuff into one cohesive and coherent narrative. I never lost focus on ‘the story’ as I wrote. In my rewrites I thought like a very tough script editor.

Some of your memories of being male, while they were conflicting for you to recall, I also found romantic – dancing free on a rock, fashioning yourself like literary heroes and sensitive, masculine movie stars. My own feelings bordered on envy that you had known life and love as both sexes. Do you ever feel lucky for this?

Wait ’til you see my biceps, honey!

Yes, I feel very lucky; sometimes slightly absurd when a guy is coming on to me. ‘Dear, I know what you’re going to do next!’ In bed it does get confusing (…blushes). White does catch that sense of absurdity nicely in, The Twyborn Affair.  (Quickly changing topic to something literary.)

Yes, I have led an extraordinarily ‘lucky’ life: two lives for the price of one is very good value.

Steve McQueen and Faye Dunaway were early role models for me. Putting them together in The Thomas Crown Affair was almost too much! It was like watching me mating with me. Over the years I’ve dressed and comported myself like both. 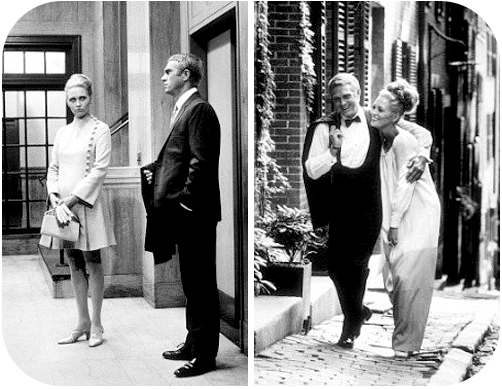 You have dealt with isolation and alienation from others, because of your need and the choices you’ve made, but you’ve also found many who are immediately accepting, even empathetic. Can you talk a bit about the difficulties of understanding?

A mistake I often make is to assume that other people can ‘understand’ me and what I’ve been through. It takes an enormous fund of empathy and imagination for others to think themselves into this space. And it requires them to also not be challenged within their own discomfort around their own life choices. The problem is compounded by our rigidly bipolar concepts of sex and gender and our need to immediately categorise somebody into one of those boxes.  Thus, some gay men see me as a variant of an effeminate gay man: which would horrify such a man, who has no intention of being mistaken for a woman – let alone losing his balls for it. Some lesbians see me as an insidious product of the patriarchy intent upon stealing their cultural space from them. Some straight men find me too much of a challenge to their own very fragile sense of gender identity.

A fun question – is there something or someone you see as the ideal feminine? Why, or what do you see in her/them?

I love women of style, grace, talent and beauty. At the moment the two who encapsulate that best for me are Carla Zampatti

I love Carla’s clothes: particularly the way she cuts a suit. Such elegance. My favorite black suit is by her. Emmy Lou’s song, ‘Red Dirt Girl’ is a particular anthem of mine. I know I’ll never achieve her voice but I’m working on the hair. (I have the guitar.)

Something else about both women: you can talk about each without referencing a man (or two). Otherwise I would have included Carla Bruni in the mix.

Here’s me and my guitar back in the early days. The guitar hasn’t changed.

What are you working on next Josie?

That’s the hard question. I could say that I am working on myself and any book that arises will flow as a byproduct of that process. My blog permits me to throw out little idea hooks. They seem to deal with the big question of personal identity – and not just genderised identity.

I sometimes fear that my fiction gene got eliminated in the last lot of surgery on my head.  In the past fiction was a veil to hide myself behind. Or a screen upon which to project images of masculine virility. I don’t need the veil any more, so I am uncertain of how to move ahead. But I am most at home when I am moving into unknown territory, so that is a good thing.

12 thoughts on “The real possibility of joy: an interview with Josephine Emery”

My Tweets
Truly chuffed to have an essay in this exciting anthology of writers reading other Australian writers! Edited by @blindybop, Reading Like an Australian Writer is a great resource for emerging writers, creative writing students, and anyone who loves Australian literature. My essay is on MJ Hyland and how she uses tension in her novels (with some broader thoughts about tension in literary and character-driven works). The book has essays by so many great writers, including Ellen van Neerven, Ashley Hay, Roanna Gonsalves, Julienna Van Loon, Jane Rawson, Anna Spargo-Ryan, Fiona McFarlane, Hoa Pham, Emily Maguire... too many to type out! Many of my own favourite authors, writing on other favourite authors, such as Nam Le, Carrie Tiffany, Charlotte Wood, Gail Jones, etc. etc. The book is released in May and you can pre-order it now 💫 #bookstagram #Auslit #australianwriters #australianbooks #australianbookstagram #creativewriting #writingadvice #reading #amreading
Thank you @with_love_from_m for sharing your Aluth Avurudda celebration with us (your housemates) 😊 You all should click through and check out Mekala’s art / social enterprise With Love from M 🌼 And Happy New Year to anyone who celebrates.