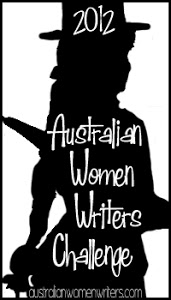 After completing the recent survey on the Australian Women Writers Challenge website I decided it was time I looked at my reading and reviewing of books by Australian women writers in 2012.

On the Overland website Jane Gleeson-White has declared 2012 the year of Australian women writers, and has provided a fantastic summary of the year in relation to the challenge, the Stella Prize, and the success of female Australian writers in prestigious literary awards. Founder of the AWWC, Elizabeth Lhuede, has also written an extensive report on the challenge for the Huffington Post.

Collective blog/reviewing challenges aren’t something I usually partake in. There are many demands on my reading already (for Uni, for specific festivals and events, for commissioned reviews) but I thought this challenge was important. Personally, in previous years where I’d recorded my reading, I had noticed a bias (about 60-70%) towards books by male authors. I’m not alone in that, it’s something that has been well recorded and discussed recently (and is one of the reasons Lhuede began this challenge). I wanted to consciously break that habit, and share reviews of some of the books I came across. I also probably don’t have to explain the significance for me, as a writer of fiction and nonfiction and someone who intends to have a future in this industry, to publicly address a bias such as this.

So here are the books I have read (so far) by Australian women writers in 2012. See the hyperlinks for any reviews or interviews, and feel free to ask me about any of the others in the comments section below.

I also read my friend Amy Barker’s excellent manuscript Paradise Earth, and I read many poems, short stories and essays by Aus women writers throughout the year in journals and anthologies.

So far this year I’ve only read an abysmal 67 books in full (I have started a lot more…). 31 of them were by Australian women and more than half of them were by women in general, so I have done well at creating a positive bias this year. My absolute favourite book that I read this year was The Fortunes of Richard Mahony by Henry Handel Richardson. I wonder if I would have read Mahony if I hadn’t done the challenge? When The Lifted Brow asked me to review one of the Text Classics I deliberately went for a female author, and ended up with Mahony. It was worth doing the challenge for that alone: one of the best reading experiences I’ve ever had.

Will I be doing the challenge in 2013? Not exactly.The challenge has done the trick of making me more aware of my reading choices and has helped me discover some amazing literature. But I don’t need to do it as a challenge in 2013, I’ll just be more considered each time I face the pile. I’m also taking a month’s break from social media in January (!) in order to finish my thesis, and just to give myself some head space. So I’d prefer not to take on any specific challenges. I’ll have plenty of good reading to get on with for the Perth Writers Festival…

Please feel free to link to your own round-ups of the AWWC in the comments below!

9 thoughts on “The Australian Women Writers Challenge 2012: how did I go?”