This is cross-posted from Southerly, where I am blogging in December.

This book has been near the top of my pile since July and I finally picked it up to start reading on a flight to Sydney recently. I am an animal lover but have barely read any books on animals! What seduced me about this book was the pictures and descriptions of the resident chimps of Fauna Sanctuary in the middle of the book, ie. under the picture of Binky: ‘Binky may look tough, but he’s actually a very sensitive and loving chimpanzee as well as the resident practical joker’.

Fauna Sanctuary is located in the Canadian countryside, and houses a range of chimpanzees who have had traumatic lives in laboratories. Some were taken from the jungle, some raised in captivity (and in places like circuses, with humans) before being given over to medical facilities. Andrew Westoll volunteers at the sanctuary. He learns about the chimps’ histories and gives us a detailed overview of what they were subjected to. He also gets to know the chimps intimately in their new environment – their traumas and relationships; their individual personalities.

It’s a moving and important book. Westoll brings into perspective both the similarities and differences between chimpanzees and humans – why they were used for invasive medical research, why it has (for the most part) been a failure, and why we must respect them on their own terms. Chimps are similar enough that they experience a range of emotional and psychological traumas by being locked up, knocked out and operated upon. It’s heart-wrenching reading. But chimps are animals, with their own social structures, rituals, fears and behaviours. They have a right to be respected as animals, not just because they are genetically close to human beings.

I loved learning about the chimps and sharing some time with them on their path to recovery, through Westoll, but I also enjoyed meeting Gloria, who runs the sanctuary. What a dedicated, strong and amazing woman.

The book is written simply, and is hugely empathetic and informative. Westoll builds the real life story and characters while going back through both the chimps’ personal histories and the general history of human-chimp relations.

You can read more about the sanctuary and donate to the Fauna Foundation here.

This is an enlightening memoir of living with schizophrenia. Jeffs takes us back to her difficult childhood in Ballarat, her university days and the contradictory pulls of religion and liberalism, and each of her major psychotic episodes from the time she was 23. Her story not only helps us to learn what it is like to live with her mental illness – the terrorising voices, the threat of death and more – but takes us through the treatments over the decades. Was it better to have been given ‘asylum’, despite the over-medication, the bad food and the sometimes ill-treatment of the staff; or is it better now, when there is more burden on the carers, when one is moved quickly through the system (she calls it ‘McDonalds therapy)? It seems as though there are pros and cons to each, and one great thing is that Jeffs, and other people who have suffered mental illness (plus their carers) now have a voice in the community and can provide insight to both professionals and the public. There are better drugs, and Jeffs now also has more access to other kinds of therapy, to get at the traumas which she believes contribute to the specific imagery and manifestations of her illness.

Jeffs raises many questions in the book, and one is whether both nature and nurture have a hand in her illness. Reading the book, too, I felt so grateful to the two women with whom Jeffs has lived and been in a relationship since that first episode, and to her other close friends. They have provided encouragement, warmth, love, understanding, and have had to make difficult decisions. Jeffs acknowledges the fact that there are many people out on the street because they don’t have this kind of care.

Of course, Jeffs lives with the voices every day. They were with her even when writing the memoir, and she gives us a detailed account of their obsessions, language, paranoia and negativity. ‘Mental illness is as unique as the individuals it touches. Because we all have our own imaginations and life-experiences, our madness will express itself uniquely too’, she says. I certainly feel this is true, as I read a while ago Will Elliott’s compelling, frightening memoir Strange Places, and each author’s experience, while having some common elements, is entirely different. It should be pointed out that while these books are wonderful because they will provide education and understanding, and will ultimately improve the lives of others living with mental illness (and their suffering is at times huge, terrible, poignant), they are both also well-written, gripping, moving narratives. 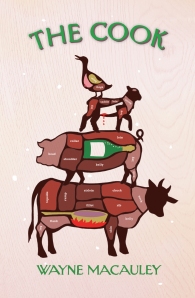 It is so hard to know what to say about this book. I found it utterly compelling. It gave me this odd excited (but slightly ill, nervous) feeling in my stomach. I think I expected some kind of parody (given it’s set at a cooking school for disadvantaged kids); instead it doesn’t seem to fit into any genre. It’s a cliche to say this, but I haven’t read anything so strikingly ‘original’ for a while.

The main character, Zac, immediately clicks with cooking school, sees it as an opportunity. He learns not only how to grow, raise, slaughter, cut and cook food but he learns how to serve. (Admittedly, the sick feeling I had came partly from the graphic descriptions of slaughtering animals.) Zac is out to impress Head Chef and later the family he works for:

‘What else are rich and successful people except those who’ve learnt how to manipulate what’s around them a guy dealing in the money market architects designing fancy buildings TV guys making TV shows selling dreams to losers writers and their happy endings. That’s what civilisation is I reckon manipulating nature.’

The voice is seductive, and through most of the novel I was behind young Zac (but then there was that sick feeling, as I said). He is ambitious, coldly so, but Macauley does tap into a kind of cultural consciousness about the ‘battler’, and the kind of equal opportunities free market capitalism bla bla. What is fascinating (and part of what makes it original) is for the majority of the novel, nothing much goes wrong. It defies a kind of traditional, learned narrative logic. Protagonists are supposed to get into shit, aren’t they, and struggle to get out of it? But Zac rises and rises. And yet… you feel a little ill. When is it coming? you think. You know there’s something not quite right.

I also had no real idea what the themes/messages were – though much becomes clear at the end. It would be a struggle to review this book (just as I had some trouble recently with Charlotte Wood’s Animal People) as it all only becomes clear at the end. I wondered, was it anti-rich? pro fresh produce? anti-meat-eating? pro or anti haute cuisine? was it serious, satirical, nothing? All I knew was that it was good. There manages to be such movement in the story: the voice and pace are brilliant. And all the pieces add up to make a rich, dark, bloody puzzle. It’s black, it leaves you reeling. You’ll think about it long after putting the book down.

If you want to read more about what it is about do see Owen Richardson’s excellent review. But I think this is a good book to read without knowing too much.

3 thoughts on “Recently read: non-reviews of The Chimps of Fauna Sanctuary, Flying with Paper Wings, The Cook”

There was an error retrieving images from Instagram. An attempt will be remade in a few minutes.