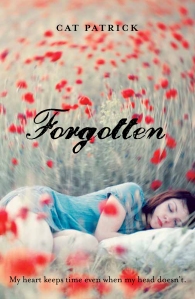 London Lane can remember the future, but not the past. This is the simple yet compelling basis for Cat Patrick’s debut YA novel, Forgotten.

Each morning at 4:33am London’s memory is reset, erasing all events from the previous day. London relies on her knowledge of the future, her trusted friend Jamie, her mother, and a system of notes to help her navigate everyday life. This system works until London meets Luke Henry, a boy worth remembering; Jamie starts a dangerous liaison with a teacher; and a dark new memory appears.

Short-term memory loss is not a new subject for works of fiction. Forgotten handles it in a unique and intriguing way through the concept of future memory – a concept made prominent by researcher P.M.H. Atwater. London’s future memory is similar to ordinary memory – near events are recalled more easily while distant memories are sparse: of significant, recurring people, or of a single event that is so traumatic it resonates. London knows which classmate will ask her for dating help next week and which one will get pregnant next year, but not what will happen on any average day in, say, three years’ time.

The central mystery is framed by a popular misquote from Michel de Montaigne that opens the novel:

Nothing fixes a thing so intently in the memory as the wish to forget it.

London tries to unravel a painful memory in which she and her mother are devastated mourners at a funeral, but the identity of the deceased is unknown. This plot thread has enough twists and turns to keep even the experienced reader engaged. First person and present tense are used to great effect – immersing the reader in London’s point of view.

The book raises questions of agency versus the act of surrendering oneself to fate, both through the memory of the funeral, and through the characters’ relationships. London considers the potential for a relationship with Luke – she keeps encountering him, yet she has no future memory of him. London constantly faces the choice of adding him to her notes to ‘remember’ him, or saving herself the heartache by letting herself forget him forever. London also comes into conflict with her friend Jamie, wanting to protect her from an affair with a married teacher, knowing just how badly it will end. Jamie is adamant that she does not want to know what the future holds – she is enjoying the present, and she wants to embrace it regardless.

The characters are endearing, and realistic in their passions and flaws. Acts of dubious morality are explored rather than avoided, such as Jamie’s affair and London’s attempts to alter this seemingly pre-determined fate – attempts that not only go against Jamie’s wishes, but which leave other characters paying the price for London’s experimentation.

Luke is loveable, though a little too perfect. The description of his dimples and his marble-like chest are overstated, even in the context of them being new to London each time. In spite of this, I challenge anyone to not be grinning like a fool at his attempts to seduce London.

My quibbles with Forgotten are few and minor. Within the story it seemed improbable that London wouldn’t know a little more about her condition, e.g. have an established file of doctor’s reports. Similarly, it would be pragmatic for the school to be aware of London’s condition, even if only on a superficial level.

Overall, Forgotten is a charming book with a distinctive concept. It manages to contain potentially unwieldy events and ideas, fashioning them into an intriguing narrative that ends in a way which, while not as good as it could have been, is both clever and complete enough to be satisfying. 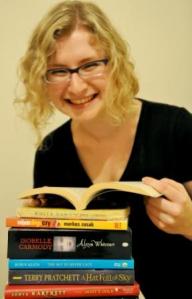 Jordi Kerr is a freelance writer with a passion for YA novels, films, and fantasy. You can learn more about her work at www.jordikerr.com, or can stalk her on Twitter @WritingJordi. She would like to thank Keith from the State Library of Victoria for finding the original Michel de Montaigne quote.