The following three books are some of the new ones I’ve read in preparation for Perth Writers Festival (5 to 7 March). I’ll be chairing panels featuring the authors. Find out more about those panels on this post. 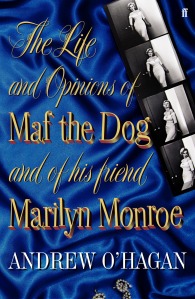 I’m a huge Marilyn fan but was at first skeptical of this book. A book from the point of view of Mafia Honey, the dog Marilyn owned in the last years of her life, seemed like such a novelty. But I was surprised by what this book actually was. In the vein of Sam Savage’s Firmin, our narrator Maf is wordly, philosophical and political (a Trotskyist) and most definitely literary minded. His beginnings were bohemian, in the home of Vanessa Bell and Duncan Grant. In his ensuing adventures with Marilyn he comes across many writers and intellectuals including Allen Ginsberg and Carson McCullers. Not to mention Hollywood figures like Frank Sinatra (who gave Marilyn the dog), Natalie Wood, Elia Kazan and Shelley Winters (to name just a few).

If you already have an interest in early 1960s America – a time of great change and wonder (think: space travel, drugs, UFO sightings) and specifically in literary, filmic, philosophical and political matters, there is a lot here for you. If you know a little about the Actor’s Studio and Lee Strasberg; if you know a little about the people around Marilyn such as her analyst Marianne Kris and later doctor, Dr Greenberg (and have an interest in psychoanalysis or at least its hold on the era), again, there is much here for you. And if you like dogs – there is certainly much here for you. The book is packed with asides and footnotes of dogs in history, dogs in literature and dogs on film and TV.

If you wonder how Maf is so knowledgeable, O’Hagan has an answer for that. He imbues dogs with absorbent, intellectual, empathetic souls. They can understand any language, can read thoughts and moods (though of course cannot see colours). Cats speak in poetry, while dogs speak in prose, which is a nice touch. What this means is that Maf becomes a kind of omniscient narrator – attuned to the stories, memories and emotions of characters, expressing them through the taint of his very specific (and charming, I thought) personality. I didn’t always agree with Maf’s assessments of Marilyn (but Marilyn fans get like that) but I did find his observances of Lee Strasberg, Sinatra, Kennedy, and many other characters hilariously spot on. I thought this would be a light book but while it is funny it is definitely an intellectual book. I think, if you weren’t ‘into’ many of the things Maf is into, you may find some sections long winded. But I thought it was simply darling. 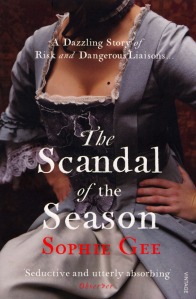 Scandal focuses on a social ‘season’ in London in the early 18th Century and the plot is based around political and social intrigue, personal ambitions, and public scandal. The narrative flits between characters, from the celebrated beauty Arabella Fermor, to the charming Lord Petre, and the poet Alexander Pope. It is Pope’s satirical observations of this season (in The Rape of the Lock) that form the literary/historical basis for this novel. Gee gorgeously describes the dirty streets of London, the bedrooms, the ballrooms, the dresses and more. One of her main strengths is dialogue – it’s sparkling and clever and thus so much fun to read. It was amusing going from Portrait of a Lady to this. In Portrait, James could only allude to the nature or relations between the characters (which is still lovely and allows room for imagination), but reading this straight after was like going from a PG to an MA movie – loosening the stays and peeking under layers of skirt. A ‘witty and diverting’ read, to use the language of the era in which it’s set. 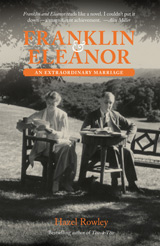 The Roosevelts had 40 years of marriage and held positions of power and influence in a time of great upheaval and change in American and world history. Rowley takes a look at both of them in detail, and the unconventional relationship they had. I was particularly interested in Eleanor – her ‘goodness’ and her hardness, her exposure to progressive ideas at boarding school, her romantic friendships with men and women, her causes. She stood behind FDR and his public choices (and Franklin struggled with being progressive while keeping the vote of the southern states) but worked behind the scenes on civil rights, women’s issues and more. FDR was elected president though he could barely walk on his Polio-ravaged legs (it was carefully concealed), and there were many milestones in his presidency – the end of the Great Depression, the end of prohibition, World War Two, to name a few! There were plenty of personal hurdles, too, and it’s fascinating to read about these two personalities and the community of people who surrounded them – the ‘inner circle’ and all its strange dynamics. There could be whole books on Louis Howe (FDR’s long-time assistant and campaign manager) or Missy (who devoted her life to FDR and whom everybody loved), or even the Whitehouse housekeeper Mrs Nesbitt, whose terrible food was legendary. Not only is the book informative, but it’s warm, and the story unfolds like a novel. It makes you think deeply about people and power, and about history and change. This one is highly recommended.