So first of all, I had too many wines at the Emerging Writers’ Festival artist party on Friday, so I didn’t roll up until about 1pm yesterday. The Town Hall was PACKED with moleskine-carrying, tweeting, emerging writer-types of all ages.

Pictured: Tiggy Johnson and I at the EWF artist par-tay.

Before I go into the delicious panels I sampled, let’s talk a bit more about that party. I’ve had a bit of a thing in the past about trying to nail down one or two people and actually having a meaningful conversation with them. But last night I was all like ‘f**k that, I’m going to talk to everybody’. Unfortunately I missed out on a few lovely heads, but all in all I did pretty well. Highlights included – Jess Friedmann’s warm lipsticked grin (she’d just handed in her Honours thesis) and having an impassioned conversation with Craig Schuftan re David Bowie and other musical greats (did you know Diamond Dogs is probably my favourite album? ‘We Are The Dead’/‘1984’/‘Big Brother’ FTW). Actually, I can’t remember much else about the night except faces and smiles and nodding a whole lot and being like ‘YEAH, GREAT’.

Afterwards I went to meet G & drink on at his place with the Muppets, but I hear at Horse Bazaar, where EWF folks kicked on, some fun was had by a very nice and talented writer on a mechanical bull. I wonder if this adventure will make his next book?

The first panel I went to yesterday was called Never Surrender, hosted by Stu Hatton. Paul Callaghan, Elizabeth Campbell, Sean Condon and Dee White spoke about rejection. The enthusiastic and sexy-accented Paul Callaghan provided some gems. He acknowledged that ‘every day as writers we fail’. Not only that, as human beings we fail every day – as people, as game players etc. (Paul is a games developer and writer, among other things.) Failure, he said, is ‘fundamental’ to the learning process, and to the play process – experimenting and figuring out how the world works. For Paul, it’s not something to be avoided, but something to ‘reframe’. Failure and rejection are ‘awesome’ because they’ll ‘teach you about yourself’ and about the world you live in. Every rejection, for Paul, has felt different. It’s never nice, but it’s something you live with.

Dee White’s YA novel is called Letters to Leonardo. It took ten years and ten drafts but Dee said if you stick with a story you love, if you really believe in it, you’ll get there in the end. She also suggested not just having one project, or one submission, out in the world at a time. It provides a kind of buffer zone of hope.

Sean Condon is a published author of several books but in recent years he’s faced a lot of rejection. A current manuscript was rejected by 36 agents this year! (I think that was overseas agents.) Condon was funny and quite controversial. The humour came from his being overtly literal and explaining/analysing everything he said, ie. quoting VS Naipul and saying ‘he said … in his Indian accent’, and (reading his own article) ‘says me, in 2006, on the page’. The controversy was his naming and berating one specific Australian publisher. I know quite a few people who’ve had extremely positive experiences with the same publisher, so I felt he was being a bit bombastic. I think, in today’s saturated book market, where editors are receiving a gazillion emails a day, perhaps they just don’t have the time to reply to everything. It’s a shame, but it’s the way it is, I suppose.

Elizabeth Campbell writes poetry, and has a collection called Letters to the Tremulous Hand. She said failure is not only inevitable but it’s productive. She reckons it’s ‘very easy to get poetry published in Australia’. I’d say it probably is if you work as hard as her on the poems. She said out of the hundred or so she starts in a year, she’d see about twenty through. She said you fail every time you write, really, because you’re always trying for the poem, but if you actually wrote the poem you’d have no need to write anymore. Thus, as ‘exquisitely painful’ as she finds writing, she is compelled to go on. ‘Set out to fail extraordinarily and internationally’, was her advice. There’s no use just trying to please the small pool of people you know. In Australia, she said, poets fail anyway because there’s no audience and no critical culture. Shi-it! I guess you just gots to write what you gots to write.

The second panel I went to was Mining the Personal. Benjamin Law talked about when he started writing for frankie, and realised his family made good material. ‘You can’t write about yourself without writing about other people as well’, he said. All six of Law’s family members read the draft of his book manuscript, running through it with a red pen. He said at times they seemed grateful the family stories (as mortifying as they may be) were ‘being preserved’.

Jon Bauer, whose debut novel Rocks in the Belly, comes out in August, provided good contrast on the panel, talking about the role of emotional truths in fiction. ‘I painted fictitious lives with my own emotions,’ he said. ‘Art should be skinless,’ he said, and that after years of translating truth into fiction, now everyone seemed to want to ‘look up [his] skirt’ – as in, look for the author in the fiction. ‘You’re looking for me but I’m not there anymore,’ he said, and then brought up something which has always fascinated me – how an author doesn’t really have much control over what emotional truths the reader brings to the page. The ‘writer and reader meet in the middle’, he said, and all you can do is provide some genuine ‘echo-chamber’ for the reader’s emotion. (BTW, I featured Bauer in mid-2009, as ‘One to Watch’. Told ya.) 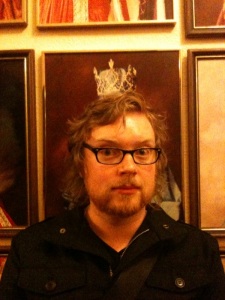 Samone Bos has shared her personal life for eight years on her blog(s) – partly to entertain herself and partly to keep up a writing practice. It’s a ‘celebration of the mediocre’, she said. Strangely, her family doesn’t know she blogs about them. I wonder what would happen if they ever found out? She recently switched to using her own name, but is careful about blogging about her twin babies – as she doesn’t want them to feel embarrassed one day in the future. Overall, you just have to feel comfortable, yourself, with what you put out there, she said.

Lou Sanz is a comedy performer, writer and blogger. Currently, a TV show is in the works based on her blog, which is based on her life. Mostly she recounts dating and relationship experiences. The one she told us was a bit like a Seinfeld ep, except instead of being a close-talker or having massive hands, this person just decided to ‘get comfortable’ by removing all clothes except a T-Shirt. It was hilarious.

In the afternoon I got along to The Pitch. A bunch of editors and publishers basically told the packed audience: ‘read the submission guidelines’. I couldn’t believe some of the stories. People send blank emails with attachments? People still write ‘Dear sirs’? People send TEN TO FIFTEEN pieces of writing to one place? Anyway, it was an amusing afternoon. One dude in the front row had a shirt with ‘Will whore myself for publication’ on it, and detachable fabric business cards around the bottom. A couple of audience members had also obviously wasted money on manuscript assessments and ‘accredited’ editors because they thought it might make their manuscripts suddenly jump to the top of the slush pile (and the Black Inc. editor soberingly told the audience they’d published one book from the slush pile in ten years). There were also stickybeaks outside Town Hall peeking in the windows (and even taking photos). I was sitting there thinking about how curious people are by nature. We all want to know what’s going on (at least a little bit – to then embellish with our imaginations). I wondered what stories the rubberneckers were telling each other as they walked away.

Today is the final day of the festival. My panel is at 3pm! Perhaps I’ll see you there.

2 thoughts on “Never surrender! (But do read the submission guidelines) – EWF 2010”