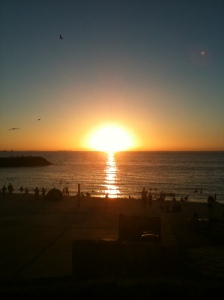 The last three days just slipped by. I thought I felt the Earth rotating beneath my feet on Monday night as I watched the sun set on Cottesloe Beach. My first sunset. A pink ribbon with little ships in it. Some people paused and others continued splashing and squawking like the rainbow birds.

On the University campus, there are inquisitive peacocks. They called out during the speeches at the Indigo V journal launch – an affair which had me a little awestruck, being massively serious and overwhelming my tipsy ears with thank you lists (my sister and I unfortunately got the giggles, drawing some dirty looks). The launches back home aren’t slapdash, but I guess there are so many journals in Melbourne, they’re more laid back, and no one sings other people’s stories with laaaaa and whispery bits added in. Sounds like a killer journal though – I have a copy back home and I’m looking forward to dipping in!

After the launch was Cottonmouth – a night of readings and performances. It began with some experimental music, which I was later told did its job of weeding out those whose minds were unwilling to be open for the evening. The music wasn’t my cup of tea, but Craig Silvey and I just continued a great D&M we’d been having about everything that gets in the way of writing. And that is: everything. Then we were treated to a number of performances – stand-outs for me being Tom Cho (always); Eleanor Catton reading the beginning of her next work – a 16th Century fantasy novel; Simon Cox’s God in a red candle image; Patrick Pittman’s female supercomputer; Judith Lanigan’s incredible hula hooping; and the treat of new words from Josephine Rowe (who received much praise for sitting on a couch surrounded by birdcages).

Side note: Simon Cox = one of the most mature and brilliant young short story writers/poets I’ve read/heard. He’s based in Perth. His work can be found in Sleepers Almanac and other places. I predict lovely things.

Speaking of lovely people: David Carlin. Just as you’d imagine, had you read Our Father Who Wasn’t There. I enjoyed meeting him.

So, snarky audience members. Overall, out of my FIVE sessions (on one, chaired four) I was lucky. But there was one session ‘Off Like a Shot’ with ‘debut’ authors Tom Cho, Eleanor Catton and Goldie Goldbloom. First of all, when I was giving the introductions, one old lady said (imagine the tone): ‘I can’t hear‘, and I said ‘Oh, I’m sorry, is this better?’ as I moved closer to the mic. A man yelled out ‘face the microphone!’ and I said ‘I think the microphone is actually cutting in and out,’ to which he replied ‘no, it’s you‘. I said ‘well, I’m very sorry, the microphones in here were fine yesterday’, and then a man on the other side of the audience yelled out ‘don’t listen to him! It’s the microphone!’ And I said ‘thank you‘.

All was well for most of the session until two of the authors had to deal with mic drop-outs a bit later on. Then came question time. There were some expected questions such as ‘how long did it take you to get published?’ etc. then one man stuck up his hand, and said:

Goldie handled it very well. The reading she had just done was from a part set in the past, before the main events of the novel, and the flora and fauna were consistent with the historical record of the place at the time. Her main character, Gin, is has albinism (hence the ‘freak’ comment…ah, question).

I wanted to say ‘sir, there is also this word called fiction.’

I thought this might be as bad as it could get, but as we were leaving the stage at the end a hunched little old lady came up to me and shoved a piece of paper at me. ‘Can you give this to Goldie?’ Of course, Goldie was standing right beside me. As the spidery-handwritten little note made it’s way from my hand to Goldie’s I read the words ‘wheat belt’ (another ‘historical’ criticism, perhaps) and ‘You all say uhm too much’ at the bottom.

Why do they come to a writers’ festival, these people? It’s the great mystery of life.

Funnier still, is a question received by the authors in one of the children’s/YA sessions (and imagine Mark Walden, a Brit, retelling this as an elderly Eastern European woman): ‘My son is very interested in pole vaulting, have any of you written books on pole vaulting?’

Perhaps not quite as bad as the one Kalinda Ashton was once asked: ‘do you think power comes out at the end of a gun?’

I went to a session on short stories toward the end of the festival. I was pretty fried so didn’t take a lot of notes, but it was with Tom Cho, Patrick Gale and Irvine Welsh, chaired by the lovely Kalinda Ashton. Best moments:

Patrick Gale saying that readers have told him they like reading short stories before bed, they’re nice and digestible ‘like a pill’.

Tom Cho saying that a reader told him they mistakenly read the story ‘Cock Rock’ on public transport and had to cover their erection.

Irvine Welsh saying everything. But particularly the C-bomb. I cannae get enough of his accent!

Argh – so Perth Writers Festival 2010 is over. Sadface.

BIG NEWS to be announced in my world later today… I may not get to blog about it until a wee bit later as my dear ol’ Dad is in town for a week. I’m so very excited to see him. Also – as promised, coming soon are some great interviews, plus maybe some pictures from PWF, and the link to the podcast of my Alex Miller Q&A. Did I tell you he gifted me Nabokov’s first novel, too? Lovely.

My Tweets
A delicious book. A young Jewish comic living L.A. is living on calorie-controlled protein bars, having narrowed her identity to her thinness, when a beautiful yoghurt-server unlocks her deepest desires, physical and psychological. Or is it her own gestures, her own dreaming, that leads her to Miriam in the first place? This book has pages and pages of yearning – spiritual, emotional, sexual – and long, lascivious descriptions of food and bodies and sex (and a mix of real, unfolding, and fantasy). I loved it. It was a book that almost felt embarrassing to read, at times, due to its intimacy, and probably because of the aspects I related to (I too used to lunch at Subway in my early 20s because of how specifically you could control the calorie intake). Some folks may find the queer yearning here problematic, in that it’s explored in relation to a psychological lack, but I thought the desire described was genuine (and hot!), and that we shouldn’t be afraid of all the potentially murky depths of motivation for who we are and what attracts us. It was still kept multi-layered, I felt. This book is meant to be gobbled up like food, unashamedly, and that’s what I did! I can highly recommend it, but a CW for eating disorders x
A beautiful, healing day.