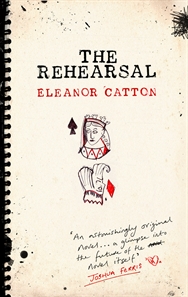 All the world’s a stage…

A novel as a performance, more – a novel as flirtation (the performance of flirting): self-conscious, inviting yet exclusive. The reader is all the roles, all the characters and all the actors – for in The Rehearsal there are layers of fictional existence – blended, glowing, beating with … not so much life, but with desire and imagination. Which, I suppose, are the stuff of life (for many of us). This is not a passive read but one that requires a bit of audience participation – a concentration of letting go, as opposed to a distraction or escapism. Catton questions whether art is ever really this, anyhow (passive, uninvolving). Don’t we want to see ourselves in the text – don’t we want to be seen, ourselves, like Stanley, the actor in this novel? Aren’t we frustrated by the things we don’t know, and the moments we’re left out of? Especially when we know someone intimately, such as, in this, when Isolde finds out her sister has been sleeping with her teacher and never let on?

In this are all the ways we want to perceive ourselves, all the drama of that and the wanting to ‘be there’ in a book; with someone; in the past; in this moment forever. And how transparent we are, in the roles we fill, like wordy characters spouting lines of obvious exposition.

This novel celebrates the myriad forms of attraction, desire – confusing, frightening, burgeoning, overwhelming desire (and its later manifestations of loss, as seen with the articulate, probing and deliberately contrived saxophone teacher, who is possibly the most memorable character in the novel). It is especially alive when girls find that they like other girls.

But there is something cruel in this, too (the fiction of cruelty, like the theatre of cruelty?) with those few characters/actors who will always be on the sidelines, will be unfortunate and miss out and there is no empathy for them because they were plain and they tried too hard. Will we be apathetic to their treatment? Will we forget about them, once the novel is over?

And Catton plays with our desire and expectations – for narrative, for drama, for intimacy with the text, and for control. But it’s more exciting to have no control, as in arousal, which to Isolde ‘… is like a little pocket of air has rushed into her mouth and sent a little shiver down her back and tugged at the empty half-basin of her pelvic bone. She feels a prolonged and dislocated swoop in her belly and a yank of emptiness in her ribcage, and suddenly she is much too hot. Isolde feels this way sometimes when she is in the bath, or when she watches people kiss on television, or in bed when she runs her fingertips down the soft curve of her belly and imagines that her hand is not her own. Most often the feeling descends inexplicably – at a bus stop, perhaps, or in the lunch line, or waiting for a bell to ring.’ Delicious.

If you want to see the young, award-winning, Canada-born and New Zealand-raised author Eleanor Catton ‘perform’, do come along to Perth Writers Festival. I have two sessions with her and I’m very much looking forward to them.

5 thoughts on “Eleanor Catton’s The Rehearsal”

Join 2,028 other followers
My Tweets
Playing around with AI images for the first time, #midjourney generated this illustration for my story ‘An Uncertain Electricity’. I love it! (Story link in bio ⚡️)
New short story! An Uncertain Electricity is a darkly humorous story about a man who helps power his city through nervous energy. It’s in the latest edition of @sciencewritenow 💡 along with other deliciously humorous science-inspired pieces of writing. Link in bio ⚡️