Neon Pilgrim is Lisa Dempster’s memoir of walking the henro michi in Japan – a challenging pilgrimage, particularly in summer, and particularly for someone who chooses to ‘sleep rough’ as much as they can – a purer way to complete the walk. I asked Lisa a few questions about her incredible journey, and about writing the book – another journey in itself…

Your purpose in undertaking the pilgrimage was to get better, mentally and physically. For me, it also seemed you started out quite determinedly self-destructive – ‘do it or die trying’. You were willing to go to the edge (or, you were already there). Can you tell us a bit about this?

I was extremely depressed and withdrawn when I went to Japan – I felt like I had nowhere left to go. I find it quite hard to talk about and usually crack a joke about being on the dole and living with my mum when I do talks about the book, but it was really serious. I was functioning but only just, I was drinking too much, I was on anti-depressants, I was completely unmotivated, I was withdrawn from my friends, and I couldn’t see any ways out of the funk I was in. I lived with my mum for a few months before I went to Japan, and that was the culmination of about two years of feeling progressively worse and more trapped and depressed with each passing month; it wasn’t just a little bad patch or anything, I was really sick.

The idea of patching things up step by step, either through therapy or drugs or whatever, just seemed too enormous – much bigger than tackling a 1200km pilgrimage! When the 88 Temple Pilgrimage fell back into my life, I became fixated on the idea that the pilgrimage would save me, that it would make me better. I pitched the manuscript idea to my publisher and when she accepted it, I grabbed onto the idea that doing the pilgrimage and writing a book about it (thus realising two dreams) would fix up the mess I was in. I couldn’t think beyond the pilgrimage really, because I knew if it didn’t ‘cure’ me then I was going to be in deep trouble mentally. I was desperate when I went overseas and, as you say, I was very much on the edge.

The journey itself was grueling, often lonely and incredibly difficult. What about revisiting it all in writing the book? What kind of experience was that?

It was really hard. I thought walking the pilgrimage would be the hard part, but writing about it was tough as well, though obviously in different ways. Writing about the physical discomfort and loneliness of the pilgrimage wasn’t difficult, though – it was very easy to revisit the pain when I was comfortable, clean and sitting on the couch within grabbing distance of my phone.

But I found it very hard to write about my internal journey. As I said, I had naively gone on the pilgrimage hoping to be ‘fixed’ both mentally and physically, but I was still deeply depressed when I came back, and I found it almost impossible to write objectively about my feelings for that reason; I was frustrated with how certain parts of the hike had turned out and found it easy to dismiss the gains that I had made because I was feeling so low while I was writing. So it was a struggle to write something balanced and representative, when I was really feeling like screaming ‘WHAT A FUCKING WASTE OF TIME, I’M STILL SICK!!!’ But in the end the writing was quite therapeutic, and by the final copy I was starting to feel on the up and could see that the hike had been beneficial. That’s one of the worst things about depression, it clouds the way you perceive things.

I love your descriptions of the people you met along the way. Could you share with LM readers a story or pic or two?

Sadly I don’t have photos of anyone I met. I don’t really have any photos at all. I’m a rubbish photographer and don’t really think in terms of the visual. In fact one of the early suggestions my editor made was to put more about the scenery and the landscape into the manuscript.

But here are a few pics for you…

Me after I got drunk and hacked all my hair off. 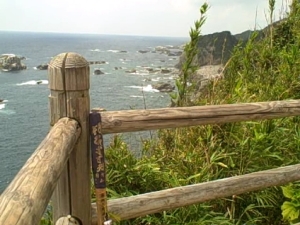 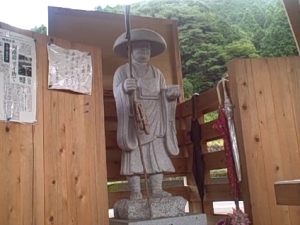 You didn’t see many women walkers in summer did you? Have you heard about many since then?

I saw only a handful of female walkers when I was hiking, and the majority of them were doing the henro michi in sections, rather than all in one hit. I don’t know how normal that is. Most bus and car henro are women, and I tend to think that probably it’s typical that women don’t often walk. There are massive gender stereotypes in Japan that make me feel quite uncomfortable – like, women are weaker, women need to be protected, women are home-makers not adventurers – so it’s not surprising that not a lot of them hike the henro michi.

Despite not being a particularly spiritual person, you had some enlightening moments, and did feel a strong presence of Kobo-Daishi. Has your spiritual outlook altered much since you’ve been home?

I went to the henro michi to do a hike and a personal pilgrimage, rather than a religious one. But I was surprised by what a spiritual experience I ended up having. As you say, I did feel the very strong presence of Kobo Daishi, or as I called him, the Daishi. I had some wild experiences that I didn’t expect, spiritual encounters that are hard to talk about because they’re so rare and unexplainable.

A lot of people ask me if I became a Buddhist on the pilgrimage, but I didn’t. I did develop a stronger interest in Buddhism though. It’s appealing because the religion focuses on spirituality and being a good person rather than appeasing a god or following arbitrary rules to gain some kind of benefit. I still wouldn’t call myself a very spiritual person, but I’ve absolutely become a bit more open-minded about that kind of stuff. Rather than become a Buddhist I’m more interested in finding my own path, a way that I can reconcile my place in the world and feel happy within it.

You had an extra challenge finding sustenance, being a vegan on the henro michi – a term the Japanese don’t have a specific word for. But you describe some delicious, well-earned meals – udon, mochi etc. What was the best meal and why?

Being vegan was an extra challenge, because in Japan there is little understanding of the concept of vegetarianism even, let alone veganism. Most people equate vegetarianism (which usually involves still eating fish) with either illness (most commonly cancer) or dieting. I was constantly being asked why I’m so fat if I’m vegetarian, because the image of vegos in Japan is of elegant and thin young ladies who ‘deny’ themselves meat in order to stay slim. In a perverse kind of way I quite enjoyed bucking those stereotypes.

My best meal was definitely when I tried Sanuki udon for the first time. I love udon and ate a lot of it when I was hiking, especially because it’s easy to veganise. So when I heard that the final province on my hike, historically called Sanuki, has Japan’s best udon, I was excited to give it a try. I’ve had so much good udon in my time that I was also a bit sceptical – how could Sanuki udon be better? But someone I met on the hike told me that the udon is so silky you can eat it without even chewing!

So as soon as I could I went out to try some traditional Sanuki udon and it was mind-blowing. They don’t serve it in a typical broth, rather the noodles come with a soy sauce which you dip the udon into before eating. Anyway, the noodles were a revelation. They were amazing and I had to eat my scepticism. I was so taken with them that I ordered another serving as soon as I’d finished my first. And then I ate Sanuki udon pretty much daily after that. And yes, you can swallow without chewing without too much trouble, though I continued to chew (and slurp!) my noodles.

Lisa, would you do it again? What’s the next big adventure?

Would I do the henro michi again? Yes – by bike. I could knock it off in two weeks by bike. I can’t see myself setting out to hike the whole thing again, though of course, never say never. I might find myself having a mid-life crisis aged 50 and hit out on the pilgrimage path again.

I don’t know what my next big adventure is, though I am planning one. I have always been drawn to epic, long-distance travel, and I want to do more of that. Active travel is also really important to me… I want to hit out and explore the world by bike, or foot, or canoe. I ride a pretty good touring bike but haven’t broken it in with a 1000km+ journey yet so maybe that’s on the cards next. As to where that might be, though… I have a few ideas but nothing set in stone. There are just so many amazing places in the world that I want to explore. 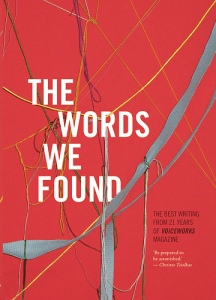 Besides being a writer, you are the publisher of Vignette Press, and you’ve just edited The Words We Found: the Best Writing from 21 Years of Voiceworks Magazine. It’s just out – could you tell us a bit about it?

Voiceworks started in 1988 and thus turned 21 this year, and to celebrate Express Media put out an anthology of writing from across the history of the magazine. Voiceworks has helped launch many fabulous writers and artists over the years, but what I was amazed by was the quality of writing by people I’d never heard of. Voiceworks has quite a distinctive style – it features writing that is raw and honest and experimental, it’s very powerful. I tried to capture some of that magic in The Words We Found.

Working on The Words We Found was fantastic. I loved going through all the back issues of the magazine – 21 years worth of reading! It was a bit of a wake-up call actually. At times I get a bit jaded about writing and the lit scene, and reading such brave and original writing reminded me of why I was drawn to writing and publishing in the first place – because it can zap you like an electrical current, make you feel something or think about things in a totally fresh way. Voiceworks writing definitely did that for me, and has done that for countless young writers and readers over its history. For that reason alone (and many others) Voiceworks is worth its weight in gold.

7 thoughts on “Neon Pilgrim – an interview with Lisa Dempster”

My Tweets
This is very cool news, congratulations to the Better Read than Dead booksellers on this historic achievement! Those of us who work or have worked in retail and bookselling admire and are inspired by your battle.
Very slow at reading anything other than work-related stuff lately but I am so glad to finally have this in my hands and I look forward to a time I can sink into it. As some of you know, I have loved Kafka’s work for a long time, and also love to read about his life. This is the central volume of Stach’s definitive multi-volume biographical work. Thanks @avenuebookstore for taking care of us with click & collect through lockdown again!