Some years ago when I was a bookstore girl, I became intrigued by this massive brick of a book called Cross Stitch (Outlander in the US), which many middle-aged women would get flustered over: ‘You haven’t read it?’ they’d ask.

I read it, and it was great fun – particularly the raunchy historical Scottish sex, and the time-travel element. I gave it to my sister (now a bookstore girl herself) and she went on to read the whole series.

I found out the author, Diana Gabaldon, was going to be in town at a dinner event hosted by Dymocks Camberwell on my sister’s birthday, on the back of her new book An Echo in the Bone. I took Sonja along for her birthday, and followed it up with a few questions about what it’s like to meet your favourite (and a very famous) author… 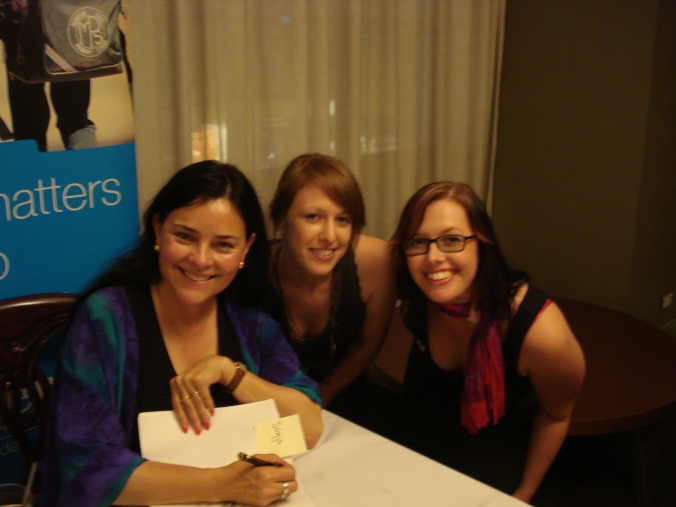 Pictured: Diana Gabaldon, Sonja and I.

It was a massive event, hey? What did you think of the crowd and the other fans?

Yeah, it was a big event – but then I haven’t been to any other author dinners so I’m not sure what’s normal. I believe there were 200 people in attendance. The crowd was generally women in their 40s and 50s, I was possibly the youngest person in the room. This wasn’t surprising, considering that the themes in her novels generally appeal to that audience. I must be weird.

You’re not weird! Maybe other young people just haven’t discovered her because her books are marketed a certain way? When we walked in the room, you were talking about the role that authors seem to play in this day and age – as presenters and actors. It contradicts their actual job – sitting in a room alone, forming this massive work, yeah?

This I definitely don’t understand! Writers seem more inclined to be of the ‘hermit’ variety of human (at least at times). Creatively, they like to be alone where they can get their head around how best to execute their art. It seems so odd to me that part of the job for a highly successful author these days is to stand up in front of a massive crowd and deliver a perfectly memorised 45 minute speech, before sitting down to sign books with their perfectly practiced plastic-looking camera-smile. All for the sake of sales. What if you had stage fright? I would be wondering when it was I signed up to be an actress.

Yeah, there’s a real contradiction there – though DG did seem quite happy to talk to us all. What did you think of her in person? And what of her speech?

DG as a person exceeded my expectations! She was very professional – she seemed comfortable in displaying herself and grateful to us for appreciating and supporting her work. She was a shortish gypsy-looking woman with long hair and an attractive face that seemed younger than her years. Her voice surprised me: a raspy fast-paced American accent that gave the impression she could barely keep up with her own thoughts, and with it she successfully entranced us. Her talk was witty, honest and delightfully nerdy. A scientist by trade, she is clearly intellectual. I loved that she had the guts to read one of the great erotic scenes from An Echo in the Bone. She knew what we would want, and she delivered!

She did speak super fast, like her brain was working a million miles an hour, though she also managed to come across as calm and comfortable! You had a bit of an awkward moment when you got your books signed, though, didn’t you?

Ha! I knew you would bring this up. You had been telling me earlier I should say something to her, and I didn’t know what to say because I know I am just another number and I don’t want to try and say something clever just to be remembered. Anyway, without anything planned we leaned in for a photo and I thought it would be nice to just connect with her for a moment. So I said (stupidly) ‘Ha, everyone must smell like wine’ (because they have to lean over her for the photo). It seems she didn’t even hear me, as she replied ‘There you go, thank you’, handing me my signed book. I walked off in a state of embarrassment and started giggling my arse off with you as soon as we were out of hearing distance. Ergh. I blame the wine.

There were some hardcore fans aiming accusations at her about the books and characters, weren’t there? It was almost like they felt they had this sense of entitlement and ownership over the works and the author as well, yeah? And then there was the dog lady…

Oh the dog lady. During Q & A this lady asked a question about DG’s many dogs and then proceeded to have a conversation with her about breeding and the appearance of her own canines. Hello? She doesn’t care, and the whole room is listening! As you said, another woman was almost making accusations at DG rather than asking a proper question.

As far as their feeling ownership, I agree that it seemed that way. It was DG’s brilliance that brought this imaginary world into our lives in the first place – so what gives these people a right to the way the story goes?  It is her creation. I guess some people see it differently. It was so good though how when DG didn’t understand one of the ‘smart’ words in the aggressive woman’s question she just said ‘Sorry, I don’t understand?’ which made the woman look totally ridiculous.

You don’t think an author has some responsibility to his/her readers? The people who are supplying them with an income?

Well, to some extent. Especially when working on a series such as DG’s ‘Outlander’. There needs to be consistency in both the content and writing style from book to book. Otherwise readers’ expectations will be understandably upset. But my point is some people seem to feel a need to challenge someone who has been more successful than them. I’m not sure why. As you know, I’m also bothered by the slow pace in her most recent novel, Echo in the Bone,and the depth in which she describes her characters’ movements. If she loses my interest then yes, there is obviously something she is doing wrong. But if I were inclined to ask her about it, I don’t think I’d do it in an assuming, superior sort of way that attempts to put her off and make myself look good in front of others.

Hehe, I’m glad. But then I know one question I asked at a recent writers fest I really stuffed up, and it seemed accusatory. Sometimes it’s an accident I think.

Does it make a difference, meeting an author (to the reading experience)? Would you want to meet anyone else?

I don’t think it makes a difference to the reading experience. Do you? But I suppose I can now see parts of her own personality that she has put into her main character, Claire, and I like that I can see this. It makes Claire even more real, somehow. But when I said this to one of the ladies at the dinner, she hadn’t noticed. I will probably think of her more now as I read, I don’t know. There are plenty of authors I would love to meet, if only to see what they are like. I don’t think it changes anything unless you love their book and they turn out to be a nasty person. I wonder if you would be loyal to them anyway because of their work or write them off because of their personality? I’m sure you have had experience with this.

Well, with some it has enhanced the experience, with others … I’ve never read their books again. Meeting both Gail Jones and Alex Miller (my two favourite Aus writers) were memorable experiences. Another author (who I shall not name) treated me like a little girl. I’d travelled pretty far for that event too. So, regardless of the fact I like this author’s writing, I have been turned off picking up their books! So it can have an effect.

Which author would you most want to meet then? Let’s make it fun and say – alive or dead? And lastly, what was the highlight of the evening?

Hmm, tough one. At the moment I would probably say Vladimir Nabokov. I am intrigued by him, as are many. But there are still so many authors I haven’t read so it could change later.

The highlight of the night for me would be the reading. I particularly remember the point where she said unflinchingly in her accent: ‘A shiver ran through him at the warmth of my mouth and I lifted my hands involuntarily, cradling his balls.’ Ha! I love her unabashed countenance and wish I had such a quality without worrying about putting people off. Care to share your highlight?

Okay – mine was when she said how when people asked her: ‘why would you have a thing for a man in a kilt?’ her reply was: ‘You can imagine it’d only be ten seconds before he had you against the wall’. Aye!

Readers – have you had the chance to meet any of your favourite authors? Was it wonderful or woeful? Who would you most like to meet?

3 thoughts on “Kilts and wine breath: a conversation with my sister about meeting Diana Gabaldon”