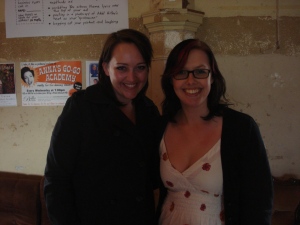 Part One of this interview can be found here.

Pictured: Emily Maguire and I before the Sleepers Salon in October.

I ask Maguire about the setting. Is it pertinent for this story to be set in Sydney? She says it probably could have been a few cities, but ‘western Sydney is – the cliché is ‘melting pot’, but it’s not very melty actually, it’s more like lots of different kinds of people clashing with each other.

‘There were a few other places in the world, there are probably parts of Melbourne, there are certain American cities that have that too. But as an Australian writing, and as someone from Sydney, I think that particular area is the kind of place where you do get these odd mixes of people who have smashed into each other and are a bit stuck where they are and so you get these weird kind of friendships.

‘There are a lot of street characters there too, they’re known as that although I’m sure they don’t think of themselves as characters – they’re living their lives – but, people who’ve lived there a long time can tell you the stories about these street people. “The man with a stick” is kinda based on a real guy.’

I was really struck by how calm the character Katie is after she acts out, such as after she harms herself. Her calmness is what’s really confronting to Adam and the other characters. There’s a scene where she’s bald, barefoot and scarred, and she’s wearing a red dress ‘of a style Graeme recognised from his youth’, and a navy and white polka-dot apron. She is making Graeme dinner. It’s a very beautiful, sad and tense scene. I asked Maguire if she thought some readers might be confronted by the book, the way the other characters are sometimes confronted by Katie.

‘Yeah. It’s really interesting to me how different people relate to the characters when they read it – I feel like I learn a lot about them. Some people have said “she’s so irritating, she’s so self-indulgent”, which I think is partly true, but others have said “I love her, she’s great” – and I feel somewhere in between the two. I hope both things are true – that even though she is irritating and kind of self-indulgent, that’s the flip-side of what I think is lovely about her, which is the deep empathy and the way she doesn’t “mature things away”. She takes everything seriously, whether it’s a celebrity’s crisis, or cooking dinner – she really throws herself into everything – which can be trying, if you’re actually with someone like that’.

There’s a part in the book, in one of Katie’s chapters, about distraction being ‘the stuff of life’ and being what allowed Katie to ‘get on with the stuff of life’. I did sort of see it as the symbolic part – of contemporary existence in general. But Maguire said that’s only one part of it: ‘I don’t mean to highlight it in just a cynical, critical way because I think distraction is a big part of actual survival. The characters don’t really have a religion or an afterlife to look forward to and you do kinda get to that point of “what’s the point?” And part of that is just connecting with other people and finding beauty in the world and things to care about. So that’s the other side of that. So it can become a really negative thing if you never stop to reflect – if you’re always concentrating on the next thing so you never have to stop and you never have to think about your life, but to an extent it’s quite a healthy coping mechanism, too.’

Because I always love to know what authors read, particularly if I admire them and their writing, I ask Maguire about some of her favourite books. She goes back often to Graham Greene. ‘He’s a Catholic writer, in that his Catholicism comes into his work, but he’s very cold and hard. His writing is old-fashioned in a way but it’s sort of the way I write too, and what I love, that old-fashioned psychological realism. Characters that really start delving into their soul, and books that examine how they make choices in their life. One of his books in particular, The Heart of the Matter, was hugely influential for Smoke in the Room.’

Jane Eyre is Maguire’s ‘touchstone book’, but more for her as a person, than a writer. ‘It’s just a really important book to me … I just love it’. She also cites Nadine Gordimer – the South African novelist, ‘who is my idol in the way she can write about politics or political situations, but her novels are still really character-driven. You never feel like you’re reading a political novel, but it’s there. It’s South Africa and it’s the context of the lives of her characters. She’s wonderful’.

After our talk, I watch Maguire in Q&A with Steven Amsterdam at the Sleepers Salon, and learn that at an early stage of writing this book, she suffered a stroke. What happened, was that she came back to the draft and found it somewhat ‘cold’. The book you read now has come about through a life-changing experience. And the characters have their own revelations – through circumstance, through inevitability, and through conscious decision. It’s sometimes up to the reader to think about just which of these things has affected an outcome (choice or inevitability?). And I’m sure Maguire would be able to see deep inside you, depending what you chose.

You can find more details about Emily Maguire and her books on her website.

Smoke in the Room is published by Picador (Aus).

3 thoughts on “This cumulative kind of effect when you stop: an interview with Emily Maguire on Smoke in the Room, part two”