Obscene is a film biography of Barney Rosset, the influential publisher of Grove Press and the provocative Evergreen Review.  He was the first American publisher of Samuel Beckett, Kenzaburo Oe, Tom Stoppard, Che Guevara, and Malcolm X. He also battled the government to overrule the obscenity ban on groundbreaking works such as Lady Chatterley’s Lover, Tropic of Cancer and Naked Lunch. And apparently, like many brilliant people, the energetic publisher was also self-destructive. 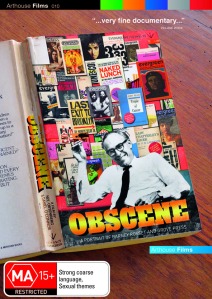 ‘No wonder Rosset was behind some of the central court struggles against censorious US standards for both literature and movies. He consorted with yippies and Black Panthers, produced close friend Samuel Beckett’s only film (1965’s Film), and was called a “tragic hero” by his own analyst (one of many). He is an interesting enough guy that one wishes co-directors Neil Ortenberg and Daniel O’Connor’s admiring portrait was longer…’
~The San Francisco Bay Chronicle

If you’re in Melbourne, Speakeasy Cinema is screening Obscene as part of the Anode festival at 8pm, Monday 2 November (1000 £ Bend, 361 Lt Lonsdale St). Tickets are available from Moshtix and include the film, plus a burger and beverage (you can also choose film-only). The DVD is also available from Madman, for those not in Melbourne.

LiteraryMinded also has a double pass (including the burgers and beer) to give away to this screening! To enter the draw, you must name two of the books Barney Rosset published. Titles only are fine. No need to put authors. Leave your answer as a comment on this blog, or tweet your answer to me (@LiteraryMinded). You must enter by 5pm AEDST Wednesday the 21 October 2009. One answer per person please. I will allocate each correct answer a number and use a random number generator to determine the winner. Good luck!

My Tweets
‘Yes, there are some writers with natural talent and such a unique way of seeing the world that they will break through anyway, but most of us mere mortals have to care deeply about the work, about not just the drafting but the rewriting and rewriting and editing and re-editing. We have to learn to discard ideas in favour of better ones. We have to learn to be patient with ourselves and with the process. We have to learn to want to be better writers, not just “published” writers. Writers who learn all this, which includes self-editing, will get better and better, and will derive great satisfaction from writing, from the work.’
Delighted to be pfully Pfizered 🌞