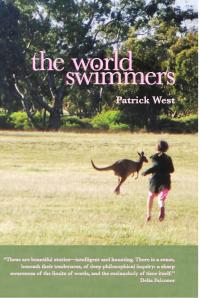 Australia’s literary landscape seems scarred by an increasingly commercial approach to what constitutes quality literature. Yes, publishers need to make a profit, but in chasing said profit, publishers close the door on any number of quality writers. All are keen craftsmen and women, and are equally keen to explore a broad definition of Australian literature rather than adhering to limiting landscapes of the national psyche.

The International Centre for Landscape and Language recently published Patrick West’s The World Swimmers, an unabashedly literary collection of short stories. Given the aforementioned centre’s name, one would imagine West’s book covers great geographical distances. West also lovingly evokes emotional landscapes, which are reflected and refracted through their geographical counterparts.

In West’s world, landscape serves to both echo and contrast with a character’s journey. In ‘Nhill’, and ‘U’, West constructs intricately detailed dual narratives: characters define their own limits within a broader, almost limitless landscape. West’s detail in these stories is exquisite, his patience indefatigable as time slows, almost to a standstill. Here, the endpoint is not nearly as important as the journey itself, and if one thing is constant, it’s the inescapable notion of change, that inability to return to a previous state.

Elsewhere West explores emotional escape and generational legacy in ‘Greenwood’ and ‘Shame’. In the former, one of two classmates named Chris reduces his past to a one-word response, and in the latter, a Japanese PhD student explores her country’s opposition to the US military while studying at UCLA. In both stories, the main character is hemmed-in by their past but hoping to create a new landscape, and indeed a greater understanding of the forces that drive them.

Throughout The World Swimmers, the author shows a willingness to write both in and outside of his own experience. Perspectives, settings, and structures change from story to story but they’re linked by philosophical investigation of the highest order. Time, identity and one’s impact on the greater world are all investigated in tight, lyrical prose. When coupled with West’s tender, at times micro-detailed evocation of landscape, a startling vision of contemporary narrative results, framed as it is by experience, one’s own preconceptions and the ever-pressing passage of time.

Such literary gravitas might frighten some but this reviewer appreciated West’s willingness to ask appropriate questions without answering back. Why is this a good thing? Well, I would argue that to reflect life, literature must by willing to at times leave narrative events outside of context. By doing this, the writing creates a dialogue, leaving space for the reader’s own emotions to permeate such rhizomatic narratives. If nothing else, it allows the reader to redefine their own perceptions when it comes to literature, landscape and language.

Laurie Steed is a writer, editor and reviewer based in Perth, Western Australia. He has appeared in various publications including the Age, Meanjin, Sleepers Almanac, and The Big Issue and he is currently studying for his PhD in Creative Writing at the University of Western Australia. In 2011, he was selected for both Rosebank and Varuna writing fellowships and is a recently appointed member of the Emerging Writers Festival PAC (Program Advisory Committee).

My Tweets
Pizza Girl 🍕 by Jean Kyoung Frazier. Gobbled this up. A young, pregnant pizza girl is drawn to an older woman who orders a pepperoni with pickles for her son. It’s a book about a young woman coping with overwhelming change & responsibility before she’s really had a chance to decide what her life might look like. She’s cared for and cared about but she has an undeniable drive toward escapism, toward more or something *else*, and it’s somewhere between an urge to destroy and one to nurture. The presence of her alcoholic father, now dead, looms large. It’s tightly written, a sympathetic and satisfying read.
Next weekend in Williamstown, Vic! 📚