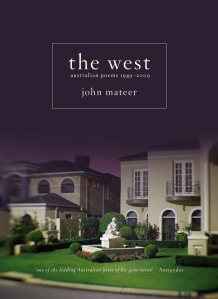 Remember that Renaissance sculpture you admired, briefly, in a Roman or Florentine church, cool and hard and chiselled and, perhaps a little too dramatically posed? Reading John Mateer’s collection of poems The West, gives an analogous sensation. The sculptors worked in marble that kept its material nature, the hardness lost in their flow. Mateer’s poems are worked out in words that never seem spontaneous, which, although natural in sound, are the result of hammer-work and chisel; and which are not the worse for it. His pieces also have the same static tension as those sculptures, they are expressed with the same realism: a stylised realism – though perhaps with less ease. There is nothing in The West, for example, to match the casual pose of Donatello’s David in the Bargello museum. Mateer is too self-conscious for that.

That self-consciousness marks another parallel, in another medium. Mateer’s persona is expressed through abstraction in even the most personal moments; the voice is remarkably similar to Bowie’s Thin White Duke of the Station to Station era. Bowie’s music in 1976 was built on rhythms that have nothing to do with dance, marking time behind glass in the same way as might an electric motor on display in some educational institution. It’s a trick taken from The Velvet Underground and then-contemporary ‘krautrock’ (which they in turn had from Glass, who had it from others; but this isn’t the first chapter of Matthew), and it’s an abstraction of the rhythm – intellectually comprehended rather than viscerally. So Mateer gives his reader passion and emotion, but the mood isn’t that of passion. The mood is of a curator.

A two poem suite, ‘The Sunlit Room’, illustrates both these aspects of Mateer’s work. When he writes in the first of the poems, ‘Her Ethiopian Crucifix,’:

When I’d stood watching
her on the bed, her lying with back
propped by her elbows, I had wished
for a photographic memory. I had told her I’m always embarrassed
by poems that aren’t specific enough.

it’s almost a set-piece of his virtues, as if a student had been set the exercise of writing Mateer rather than Cicero. I’ve said his work reminds its reader of Renaissance sculpture in its natural and yet difficult language. Taken in short fragments these phrases might be anybody’s: ‘When I’d stood watching her on the bed’, or ‘I had wished for a photographic memory’. These phrases could be heard on the train, allowing perhaps for the more frequent elision of spoken words (‘I’d wished…’ is more likely to be produced than ‘I had wished…’, but the point is still the same). Taken together they would have been said by nobody. I doubt even Mateer speaks like this. It’s everyday language, as everyday as even Wallace Stevens could demand, but it isn’t transcribed speech.

The difference is in the rhythm and the poor fit of the words with the moment (which is not a complaint). The rhythms, although irregular, are not chopped up, not prose: ‘I had told her I’m always embarrassed/by poems that aren’t specific enough’. After a couple of anapaests at the beginning, we transition to the falling off dactyl of ‘memory’; the sentence then settles into succeeding iambs which make a textbook piece of iambic tetrameter. Mateer’s triumph is that most readers won’t notice this as the poem’s foundation. As in Bizet’s idée fixe, iambic tetrameter reappears often enough to bring unity without ennui. This again is his affinity to the Renaissance sculptures, who created tension from geometry hidden beneath emotion.

The poor fit of the words to the moment is pure Bowie. Like EM Forster’s Cavafy standing at an angle to his world, these words are incongruent, unparalelled to the emotion of the moment described. Like Bowie’s plastic-soul rhythms which never make you dance, for all their brilliance, Mateer doesn’t bring you into the scene, doesn’t put you behind the poet’s eyes. Instead he makes it an object of curiosity, to be apprehended with thought rather than the emotion from which, undoubtedly, the poem grew. Just like Bowie’s ‘TVC15’ which puts on show its relationship to disco indifferently, as if it were a friend’s family tree and not its own genealogy. This is also where Bowie and the Renaissance sculpture intersect, at this point of stylised representation. Plastic-soul is mannered, not a natural expression of what Nietzsche might have called the will to dance; Renaissance sculpture presents dramatic scenes as they would never have been acted; and Mateer’s word-painting is equally stylised, setting off one aspect of the scene the better to bring out the whole. It is realism, you feel it is from the poet’s personal history (although it might very well be entirely imagined), but it is not a photographed bedroom scene.

Behind the white gables of Perth Mosque,
around the corner from the block of flats where she used to live,

she who held my heart in her hands like an injured bird,
whose laugh tinkled like a meditation bell waking me,

down a narrow street of old workers’ cottages, in a friend’s backyard
a bearded man, whose eyes are Sumerian,

whose deep voice is calm and burning like Zorastrian fire,
recites a classical Persian poem

The second couplet triggers more affect than did ‘Her Ethiopian Crucifix’, possibly because the emotion it expresses is the already indirectly nostalgic. There’s a twinge at the heartstrings. And still they words are too thought-out for undistilled emotion. They’re worked as 15th century marble was worked, with art and thought. In the uncertainty of self (‘a meditation bell waking me’) it could almost be Bowie singing ‘It’s not the side-effects of the cocaine/I’m thinking that it must be love’. Stylised realism comes again in the Sumerian eyes, chiaroscuro for the character of the bearded man. And its rhythms are a slightly free blank verse. (Mateer’s interest in the ancient world, here the Sumerians and their successors in the Tigris-Euphrates area, the Persians, elsewhere the Greeks and Romans, is another fascinating area, and might give a key to his control of his material; unfortunately there isn’t space here to discuss it).

It might seem a paradox that Mateer, poet of detachment, is weakest when writing from a less-personal point of view. Poems like ‘Adelaide’:

The city’s grid is a mirrored maze
surrounded by parkland only wide enough
to deter Russian cannonballs. Proudly
free of convicts, punctuated by statues
of a grimacing warhorse and four metre archangel,
office blocks crowd around Victoria Square

haven’t any force in them, seem anaemic. Interesting historical facts, sure, but it sounds more like a dull tourist brochure. The answer is possibly that his habit of abstracting only works when the original subject has sufficient force to animate the poem. The city of Adelaide is already an abstraction – nobody can experience the city all at once, it is a collection of associated ideas, so, further abstracted, it loses any interest at all.

The greatest weakness of The West is Martin Harrison’s introduction. ‘There is a personality, a grungy intelligence, a contemporaneity about his work; but, as a consequence, there is no room for a naivety or an indifference as to how the poem operates in the world’. Apart from the fact that the consequence does not follow from the antecedent, even in context, there is a very serious question as to what that actually means. What is ‘contemporaneity’ and how do we know Mateer has it? Why is his intelligence ‘grungy’? And then, four pages of adjectives and adverbs strung together list-wise gets tiring. Mateer’s poems deserve a better introduction.

They should have had more because their representation of the world has poise, in its Thin White Duke abstraction and Renaissance mannerism. Because in his stylised writing Mateer provides an answer to so much confessional poetry; because when you read his poems you think of Donatello and David Bowie. Who else can do that for you?

Greg Westenberg is a Sydney-based aspiring writer, whose reviews have appeared in Cordite and Blue Dog. It is his ambition to one day be taxed for writing.

[LiteraryMinded apologises for any formatting issues in the extracts that may have arisen through copying and pasting from Word to WordPress.]